More and more firms are introducing their environmentally friendly electric automobiles in Pakistan as a result of the country’s evolving legislation and electric vehicle sector. Included in this are the most recent all-electric sedans, the E-Tron GT and RS E-Tron GT, that Audi has released to the Pakistani market.

The E-Tron series seeks to deliver a sporty, quick ride while preserving the environment. To compete with the Tesla Model S and Porsche Taycan, the E-Tron GT has been introduced on a global scale.

Both the RS e-tron GT and Audi quattro, which offer all-wheel drive, have strong twin motors and two-speed automatic transmissions. Despite having lithium-ion batteries with a total capacity of 93.4 kWh, the E-Tron GT only has 83.7 kWh of energy accessible at a torque of 630 Nm. The RS e-tron GT, on the other hand, has a lithium-ion battery that produces 93.4 kWh of energy at 830 Nm.

The fresh, slick, and stylish designs of the Audi RS e-tron GT and Audi E-Tron GT quattro are shared by both vehicles. It is allegedly the most beautiful design Marc Lichte, chief of design at Audi, has ever created. Absent the front grille, the design is very identical to that of the A7 from Audi. On the front, a plastic pedestal supports the four-ringed symbol. The front also has dynamic illumination, a dynamic turn signal, and matrix LED headlights with Audi laser light. Infinite LED rear combo lamps on the back of the automobiles, along with a dynamic lighting system and dynamic turn signal, let the vehicles stand out in a crowd. 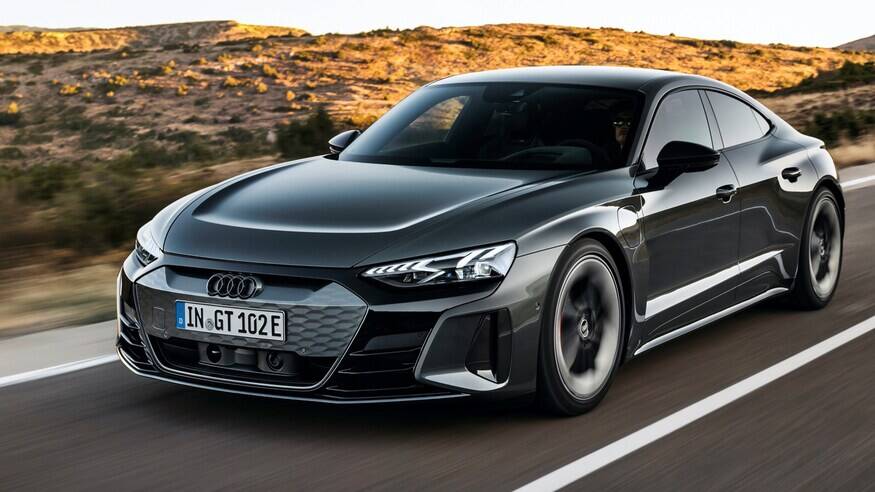 The structure is aerodynamic to achieve top speeds. Additionally, there are clever air inlets at the front. The flared wheel arches and the eye-catching rear diffuser add to the design’s aesthetic appeal and usefulness. The outside mirrors have memory functionality, power adjustment, heated power folding, and auto-dimming on both sides.

Both the interiors of the Audi E-Tron GT quattro and the RS e-tron GT contribute to the environment-friendly design since leather is an option that may be skipped in favor of more resource-conscious materials for the whole cabin. Given the modest size of the seat, it has a 4 person seating capacity with an additional 5 seats available. Although there is enough of legroom for the backseat passengers, there is not quite enough headroom.

The instrument panel and a media display are two of the many digital displays that are housed in the angular dashboard. It has all of the high-end infotainment capabilities that Audi is known for. The 10.1-inch primary multimedia display may be controlled via speech recognition software and controls on the steering wheel.

Wireless charging, a 16 speaker audio system, and a Wi-Fi hotspot with a subscription service are included in both versions. A head-up display, heated and cooled motorized front seats with a memory feature, and ambient interior lighting are further luxuries. The interior has a rearview mirror with auto-dimming. Cup holders for every passenger and an electronic steering wheel adjustment come as standard on the D-shaped leather-wrapped steering wheel. The interior places equal emphasis on utility and beauty.

Audi There are currently no rivals for the RS e-tron GT and the Audi E-Tron GT quattro in Pakistan. It competes with the Tesla Model S and Porsche Taycan on the global market.

Because all of the GT models are built on the J1 Performance Platform, which Porsche created for the Taycan, the Porsche Taycan is a formidable competitor. This indicates that the Taycan and its GT derivatives share a common platform; their only external differences. Since the Porsche Taycan is significantly less expensive than the Audi, it competes fiercely with the GT versions.

In terms of driving range, the Tesla Model S competes with the RS e-tron GT and Audi E-Tron GT quattro. Tesla offers even more mileage, surpassing the 488 kilometer’s that the Audi versions can go on a single charge. Although the Model S has a larger cabin, because to the GT versions’ superior performance, it cannot compete with them.