The mid-size crossover SUV Kia Sorento is made by South Korean automaker Kia Motors. The vehicle made its debut in 2002.

As a body-on-frame SUV, the first-generation Kia Sorento was introduced in February 2002. The vehicle was available in two trim levels: LX, which was the entry-level trim, and EX, which included an optional 5-speed manual or 5-speed automatic gearbox. An eight-speaker audio system, an AM/FM stereo, airbags, and other standard equipment including power windows, power door locks, keyless entry, and air conditioning were all included with the 2002 Sorento.

The new Kia Sorento 2022 stands out in a crowd because to its distinctive tiger-nose grille and strong design cues. The seven-seater crossover SUV has front LED turn signals and bi-function projection headlights. Position lamps and LED daytime running lights (DRLs) are included in addition to the headlights. The new Sorento’s appearance is finished with the inclusion of LED foglamps. 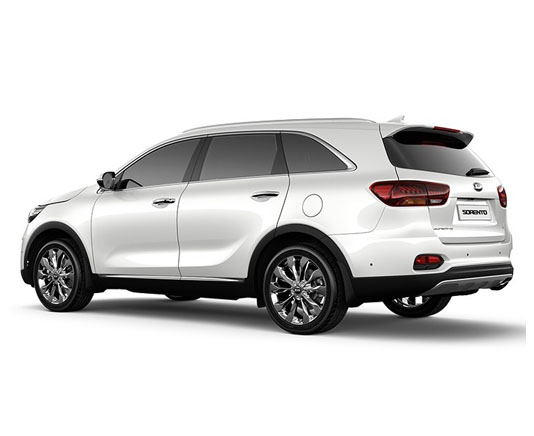 Electrically retractable, heated, and adjustable side mirrors with side repeater lighting are included on the new Kia Sorento 2022 model. Boxy LED rear combination lights are mounted vertically on the back of the vehicle. A high-mounted LED stop lamp is built into the car’s functional spoiler at the back.

A panoramic sunroof and a shark fin antenna on the Kia Sorento’s top this year complete the design.

The Kia Sorento 2022 sports a leather-wrapped steering wheel with tilt and telescopic adjustment capabilities, as well as steering-wheel-mounted controls for the functions of voice recognition, audio, calling, cruise control, and MID. The 3.5″ Cluster Conventional TFT LCD and rheostat that shows all the necessary vehicle data are located behind the steering wheel.

A 7-inch infotainment system featuring radio, media, and a rearview camera display is standard on the new Kia Sorento 2022. Additionally, the system has six audio speakers with AUX and Bluetooth connection. In the back rows, there is an additional USB outlet.

The 2022 Kia Sorento offers three rows of seating. Power reclining, sliding, height adjustment, and cushion tilting are all available for the driver’s seat in the Sorento 2.4L FWD model, and similar amenities are also available for the front passenger seat in the other trims. The driver’s seat lumbar support is standard on all grades. The third row of seats has a 5/5 split feature, while the second row has a 4/2/4 split feature. The vehicle boasts automated dual-zone temperature control, and the third row also has air conditioner vents.

In Pakistan Market the new Kia Sorento 2022 competes with