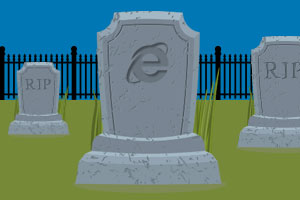 Washington: Microsoft has shut down the world’s oldest and most popular browser, Internet Explorer, forever.

Internet Explorer is being phased out. It’s finally being phased out after more than 25 years, and won’t be supported by Microsoft 365 starting in August 2021, with it vanishing from our computers in 2022.

“Because Microsoft Edge is capable of handling this and other tasks, the Internet Explorer 11 desktop program will be retired on June 15, 2022, and support for certain versions of Windows 10 will be phased away.”

After many years of solitary confinement, the Mozilla Foundation introduced Firefox in the wake of Internet Explorer in 2004, but in 2008 Google introduced the rest. Left behind.

After Firefox and Google Chrome, users almost forgot about Internet Explorer. However, Microsoft tried to make its place by introducing new browsers, but failed.

Internet Explorer is the default browser for all desktop computers. However, the company announced that it would discontinue it in 2020 and from now on the browser will not be available on any desktop.

Microsoft has warned users several times over the past few years about the flaws in Internet Explorer and suggested using the new browser, Microsoft Edge.

According to the report, Microsoft’s new browser will work on the same technology used in the popular web browser Google Chrome. Microsoft Edge will introduce different and advanced features from Google Chrome.