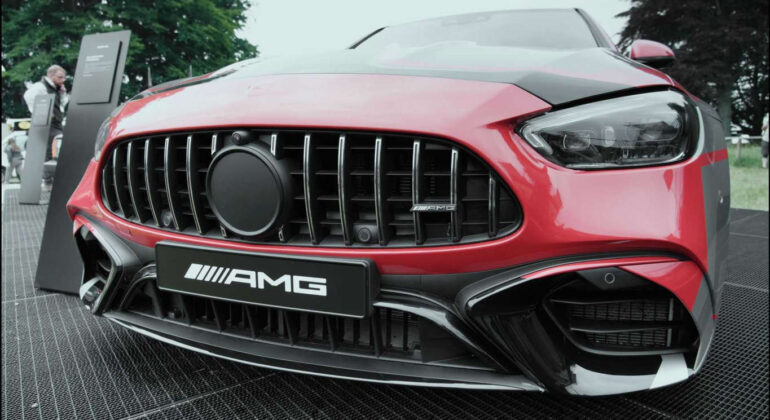 Exactly 63 hours before the premiere, AMG published the teaser image.

At the Goodwood Festival of Speed earlier this year, AMG presented a near-production prototype of the C63 that was only lightly covered. Now, the sports sedan is going to be unveiled. There isn’t much we don’t know about the BMW M3 competitor, but we’re interested to see how those intriguing technological details will translate into performance in the real world. The subsequent model, in contrast to its rear-wheel-drive predecessor, will only be offered with 4Matic.

The V8 is now officially a thing of the past, to address the big issue in the room. The folks from Affalterbach have repeated multiple times that the 2.0-liter M139 from the “45” models would be used in the new C63, but with higher power and longitudinal mounting. Yes, the vehicle will be a plug-in hybrid. A 6.1 kWh battery will supply power to a rear-mounted electric motor.

Although purists will undoubtedly be unhappy by the cylinder count reduction, the flagship C-Class should still be brisk thanks to its combined 670 horsepower.

We can only hope that the C63 Estate will be shown as well; this hot wagon will compete against the M3 Touring, a brand-new competitor. Aside: New M vehicles will also be plug-in hybrids starting in 2023.

The Bavarians, on the other hand, promise to continue with the inline-six and V8 until at least 2030 and have no plans to reduce the size of their combustion engines.

Considering its PHEV design, the AMG C63 should have a fully electric range, but given how tiny the battery will be, the combustion engine will engage sooner rather than later. Weight is a worry since, despite the fact that the four-cylinder engine is lighter than the original V8, the hybrid-related components will undoubtedly add weight, and it wouldn’t surprise us if it ended up being significantly heavier than its predecessor.

Wednesday, September 21 is the planned date for the world premiere. Due to the two-door C-Class and E-Class models combining to form the CLE, AMG will not be releasing another C63 Coupe and Cabriolet.