MERCEDES-BENZ PRESENTS THE EQXX ELECTRIC CONCEPT CAR, WHICH IS SPORTY AND ULTRA-LONG-RANGE. 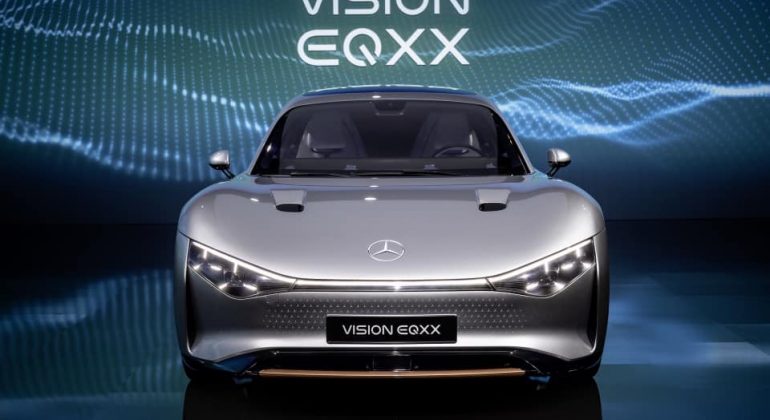 MERCEDES-BENZ PRESENTS THE EQXX ELECTRIC CONCEPT CAR, WHICH IS SPORTY AND ULTRA-LONG-RANGE.

Mercedes-Benz has unveiled the Vision EQXX, a solar-powered concept car capable of travelling over 1,000 kilometres (648 miles) on a single charge.

According to the German carmaker, increased aerodynamics and battery efficiency allow for a range of 1,000 kilometer’s.

On a single charge, the Vision EQXX can go from New York City to Cincinnati, Berlin to Paris, or Beijing to Nanjing. In comparison to other long-range EVs on the road today, such as the Lucid Air (520 miles) and Tesla Model S Long Range Plus, it’s outstanding (402 miles). Unlike other cars, however, the Vision EQXX is only a concept with no intentions for mass manufacture. (For the time being.)

Mercedes-Benz eventually presented the automobile (virtually) at the Consumer Electronics Show in Las Vegas, after weeks of teasing. (Due to an increase in COVID-19 instances, Mercedes, like most of the large firms, abandoned its intentions to attend CES in person.)

The Vision EQXX will most likely serve as the foundation for a production car that will compete with other premium electric vehicles such as the Porsche Taycan, Audi E-tron GT, and Tesla Roadster, thanks to its sporting goals and sleek, futuristic style.

The Vision EQXX, on the other hand, is said to be more based in reality. The business states that their range estimates were based on a simulation of real-world traffic circumstances, implying that it will burn energy at a rate of 10kWh every 100 kilometers, or more than 6 miles per kWh. In terms of fossil-fuel use, this equates to about 235 miles per gallon in the United States, or 1 liter of gasoline every 100 kilometers.

A range estimate is, after all, just that: a guess. Any EV range will be certified separately by the Environmental Protection Agency in the United States, as well as Europe’s Worldwide Harmonized Light Vehicle Test Procedure (WLTP). The majority of electric vehicles on the market now have a range of 200-300 miles, with some older versions having less. The current generation of electric vehicles has a range of 250-300 kilometers.

EV range is, of course, quite subjective. Even the EPA’s grading system is only intended to provide a snapshot of the agency’s testing procedure under specified conditions. It usually ignores things like hard hill climbing and the impacts of cold weather, which may deplete a vehicle’s battery far more quickly than driving on level roads or in warmer weather.

The 117 solar cells put in the vehicle’s roof will assist the Vision EQXX. The solar roof, which was developed in partnership with Europe’s leading solar energy research center, is designed to counteract the high-voltage system’s energy drain while simultaneously extending its range. According to Mercedes, the solar cells may add up to 25 kilometers of range to long-distance trips in a single day under perfect conditions.