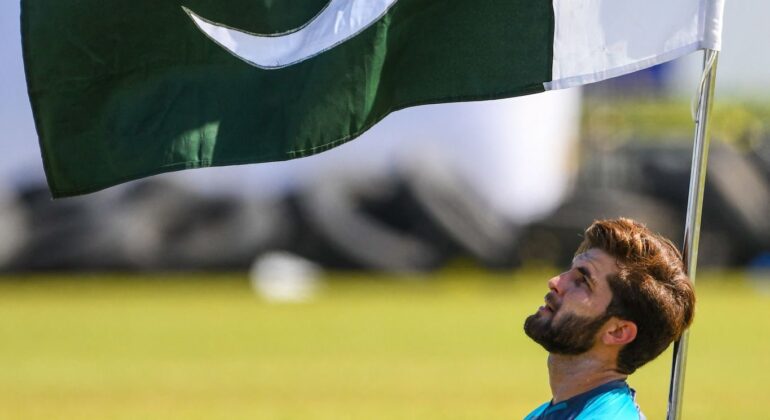 At the Twenty20 World Cup in Australia, Pakistan, a former champion, will rely on pace spearhead Shaheen Shah Afridi to be at his destructive best.

After overcoming a right knee injury sustained in the first Test against Sri Lanka in July, the 22-year-old was permitted to join the team on Tuesday.

He missed the tri-series this week in New Zealand, the Twenty20 series against England, and the Asia Cup.

READ MORE: In T20Is, Rizwan Maintains The Top Spot While Haris Rises To The Top

After a lengthy time of rehabilitation in London, the tall left-arm fast bowler will depart for Australia. He will play two warm-up matches in Brisbane the following week to restore his rhythm, the first of which is against England on Monday.

In order to be ready for their eye-popping first encounter against India at the expansive Melbourne Cricket Ground on October 23, which is predicted to draw 90,000 fans, Pakistan will play a last warm-up match against Afghanistan on the following Wednesday.

According to captain Babar Azam, “He has healed nicely, and we are certain that he will be at his best come the India game.”

“Shaheen leads our strong fast bowling assault for us.”

Fakhar Zaman, a top-order batsman who made 55 runs unbeaten against Australia in last year’s semi-final, is also making progress after suffering a knee injury.

The nation’s cricket body said on Tuesday that Zaman, one of the three travelling reserves for the T20 World Cup, will accompany Shaheen to Brisbane to finish his recovery.

Since the World Cup last year, Pakistan has defeated Bangladesh and the West Indies in 3-0 T20 series, suffered a lone T20 loss to Australia in Lahore, and advanced to the Asia Cup final in the United Arab Emirates before falling to Sri Lanka.

At home, England won the series 4-3. Prior to Tuesday’s tri-series loss to the Black Caps, Pakistan had won the first two games against Bangladesh and New Zealand.

Azam remarked, “Our squad has done well, therefore I am hopeful about our prospects in the World Cup.” His team is in Group 2, where the top two teams go to the semifinals, along with India, Bangladesh, South Africa, and two qualifiers.

Despite having Azam and Mohammad Rizwan at the top of the order, Pakistan’s middle order batting has remained their weak point.

When they scored 203 to defeat England in Karachi last month, the duo established a global record for the biggest chase without losing a wicket thanks to Azam’s unbeaten 110 and Rizwan’s 88-run opening partnership—their second double-century opening stand in T20s.

However, if the combination falters, the team’s batting insufficiency may be made obvious.

Azam acknowledges, “Aside from the positives, we had some worries and I think our middle-order has to step up,” citing the failure to consistently produce results by Iftikhar, Shan Masood, Khushdil Shah, Haider Ali, and Asif Ali despite their being given opportunities.

We sent out several batting and bowling combinations to measure our bench strength. We are also improving our fielding.