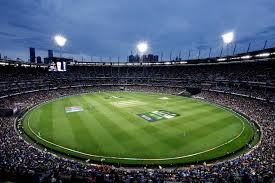 India and Pakistan have not met in the longest format of the game since 2007, when bilateral cricket between the neighbours was stopped. The Melbourne Cricket Club (MCC) is now investigating the potential of staging a Test match between the two nations.

Since hosting Pakistan in a limited-overs series in 2013, the only times India and Pakistan have faced off against one another have been at the 20- and 50-over World Cups and the Asia Cup.

The two last crossed paths at the Twenty20 World Cup in October, where over 90,000 spectators packed the Melbourne Cricket Ground to witness India triumph in a nail-biting final ball contest.

Since 2007, when bilateral cricket between the neighbors was discontinued, India and Pakistan have not played one other in the longest format of the game. The Melbourne Cricket Club (MCC) is now looking at the possibility of holding a Test game between the two countries.

India and Pakistan have only competed against one another at the 20- and 50-over World Cups and the Asia Cup since hosting Pakistan in a limited-overs series in 2013.

“Cricket Australia has been contacted about it. I am aware that Victoria’s government has done the same. Between the extremely hectic schedule and how much I can grasp, it’s quite complicated. Therefore, I believe that presents the bigger issue.

Fox expressed his hope that Cricket Australia will continue to advocate for the plan with the International Cricket Council, which oversees the sport internationally.

“I believe it would be far better to have a full house and that mood and celebrate the game with full houses,” Fox continued. “When you do see some of the stadiums across the world empty.”