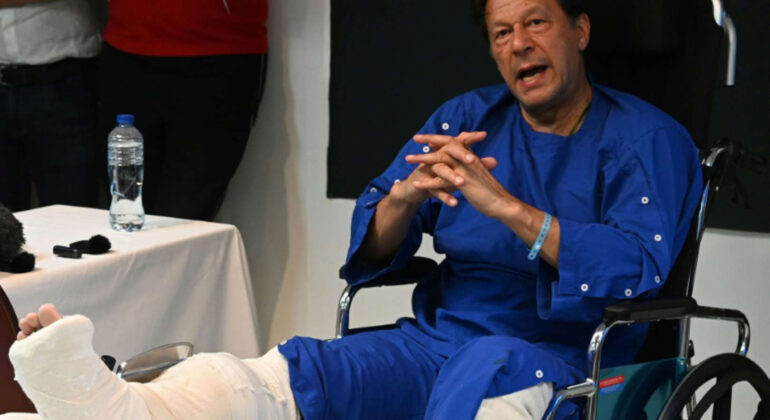 In his first public appearance since being shot earlier this month in an assassination attempt he blamed on his successor, the former Pakistani prime minister Imran Khan is anticipated to speak to tens of thousands of fans on Saturday.

“My nation will come to Rawalpindi for me.”

The shooting was the most recent development in several months of political unrest that started in April when Khan was removed from office following a vote of no confidence in parliament.
The Pakistan Tehreek-e-Insaf (PTI), the party of Khan, has been urging the government to call an early election before the current parliamentary term expires in October of next year. Saturday’s demonstration is the culmination of this “long march.”

READ MORE: Lt Gen Asim Munir Is Selected By PM Shehbaz To Be The New COAS

Khan was cited by PTI as stating in a morning tweet, “My life is under jeopardy and despite being injured I am heading to Rawalpindi for the nation.

On Saturday, there was a video going around of Khan’s assistants posing with his right leg in a blue cast that has since been removed.

The gathering will be held on a sizable open space between the nation’s capital, Islamabad, and the neighboring garrison city of Rawalpindi, which serves as the home of the country’s formidable military.

In May, rallies spearheaded by Khan descended into anarchy for 24 hours, with the capital blockaded and ongoing skirmishes between police and demonstrators across Pakistan.
The police vowed to handle forcefully with any PTI supporters who attempted to enter Islamabad this time.

Informed of potential security risks to the gathering, Interior Minister Rana Sanaullah, who Khan alleges was engaged in the assassination plan, issued a “red alert” on Friday.

He mentioned Al Qaeda and the Taliban in Pakistan as two terrorist organizations that may threaten Khan, adding that “PTI still has the opportunity (to cancel).”

According to the authorities, the murder attempt was carried out by a lone gunman who is currently in jail. Police released a “confession” video in which the owner of the trash business admitted to acting because Khan was opposed to Islam.

However, Khan, a former international cricketer who had a playboy image before he married, claimed he had long warned the authorities that any attempt on his life would be blamed on a religious zealot.

Two days have passed since the government nominated a former spymaster as the next military leader, which brings us to Saturday’s gathering.

Khan appointed Munir as the Inter-Services Intelligence agency’s chief, but he left after just eight months due to a rumored falling out.

Since gaining independence in 1947, Pakistan’s military, the sixth-largest in the world, has launched at least three coups, taking power for more than three decades.

Khan has held many large-scale rallies around the nation since being removed from office, drawing sizable audiences.

The crowd on Saturday is anticipated to be the largest yet.

PTI supporters were arriving in convoys with vehicles bearing party flags from all over Pakistan.