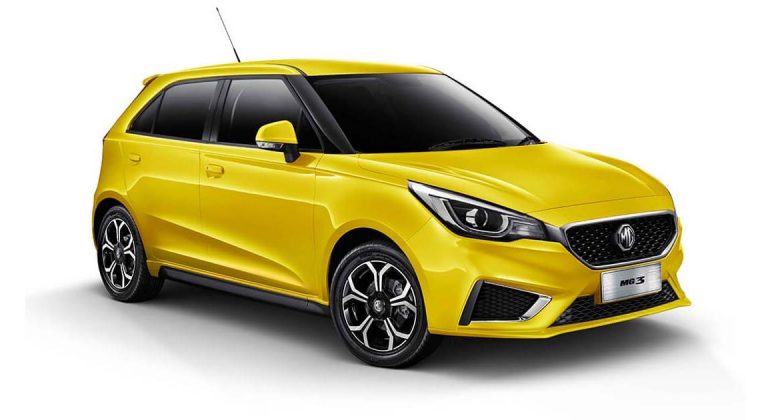 Javed Afridi, a representative of MG Pakistan, comes back with the same MG3 allegation. Afridi recently tweeted, “MG3 Coming Soon.” But the straightforward question we have is: When will Javed Bhai Kab taak arrive? This is the fiftieth time that Afridi has said that MG3 would be released shortly. We must find out the solution to this query “Soon.”

Anyway, returning to his tweet, Afridi posted a picture of himself next to a black MG3 with the message “MG3 Coming Soon.”

He posted a brief video of the vehicle in what seemed to be parking at an unidentified dealership in a subsequent tweet. The interior of the car is all black in the video, and it features a multimedia steering wheel, a manual transmission, fabric and leather seats, power window switches, a manual handbrake, an infotainment screen, and an analogue speedometer.

MG3 badging at the back, high placed brake lamps, LED halogen headlights, and a front black grille are all visible on the exterior. This is the video.

Additionally, he stated that the MG3 will cost less than Rs. 2 million in Pakistan, which seems difficult given the current circumstances.

A 1500cc subcompact hatchback is the MG 3. The vehicle is offered on the global market in its second generation. Both a 5-speed manual and a 4-speed automatic transmission are available for its 1.5-liter engine. The automobile boasts a sleek appearance and a number of high-end amenities, including:

What do you think of this brand-new Javed Afridi teaser? When will MG introduce the MG 3 in Pakistan? How much would an MG3 cost in Pakistan? Comment with your ideas in the space provided.

MG 3 Will Debut In Pakistan With Less Than 2 Million?

MG 3 Will Debut In Pakistan With Less Than 2 Million?

The owner of Peshawar Zalmi and a significant shareholder in MG Motors in Pakistan, Javed Afridi, has once more hinted that the MG 3 may soon be released there. Javed Afridi released a video of the MG 3 and said that the launch of the car was nearing its conclusion in a Facebook post.

Since Mr. Afridi hinted that the MG3 hatchback would cost Rs. 2 million, it has been one of the most eagerly awaited automobiles to be released in Pakistan.

The MG3 hatchback will be among the three new locally produced vehicles that MG will introduce in Pakistan this year, according to Javed Afridi. However, in his most recent video broadcast on Facebook, Afridi reiterated that the MG3 will be priced around 2 million.

He adds that the MG3 is nearing completion, indicating that the car will soon be introduced to our market. The MG3 hatchback is seen in several angles during the 19-second short clip, but no technical information has been provided just yet.

Remember, this is Javed Afridi’s fourth conversation about how much this hatchback costs. In February 2021, he initially hinted the arrival of this automobile for less than Rs. 2 million, which created a lot of hype. But after a long period of silence, he finally provided another update and late this month once more asked for estimates of the MG 3’s price.

What do we currently know?

You should be aware that MG Pakistan has never publicly announced any update or probable launch date. Even then, we let you know that MG wouldn’t be carrying this car in its lineup. Javed Afridi looks to be transporting the automobile to the local used car lot, though.

Even though MG Pakistan produced the HS and ZS locally, not a single one has been sold. Although Afridi has tweeted footage of MG cars being put together, none of them have been delivered to dealers. The company’s past is therefore not in its favor. Additionally, analysts in the industry claim that MG still does not have a license to sell CKD cars because it has not satisfied the government’s requirements for Greenfield status.

The vehicle is offered on the global market in its second generation. Both a 5-speed manual and a 4-speed automatic transmission are available for its 1.5-liter engine. The automobile boasts a sleek appearance and a number of high-end amenities, including:

We will have to wait to find out whether Javed Afridi will be able to live up to the expectations or if the 2 million price was merely a ploy to get a lot of bookings followed by a significant price hike before delivery, which is seen as a regular formula for generating great cash in our market. Please share your thoughts on Javed Afridi’s most recent MG3 teaser by leaving a comment.

Mahira Khan is welcomed to the MG Club by Javed Afridi.

Mahira Khan is welcomed to the MG Club by Javed Afridi.

Mahira khan as we all know her she is Multi-talented Star who made her Bollywood Debut with Shah Rukh Khan in the Film the Raees Actress The Raees star can be seen wearing an elegant pilot dress and bold red lipstick while flaunting her beauty around the upcoming car model, MG 5.

As we all saw the Javed Afridi Yesterday Instagram Post he Welcomes the Famous Actress Mahira khan to the MG Club and also share a Video as she Pilot in the New video for the Upcoming MG Model MG5.Javed Afridi had previously tweeted a video of the new car MG5 and invited his followers to recommend a price for it.

Javed Afridi Previously also Share the MG8 but fans and the buyers are a little disappointed with the Behavior of the MG Workers in the Showrooms as they have deposited the money and Book new car but Cars are not yet deliver to the Owners and people are also waiting for the must waited MG3 as it is very good looking and less expensive then other cars brand like Toyota, Honda, Proton, DFSK etc.