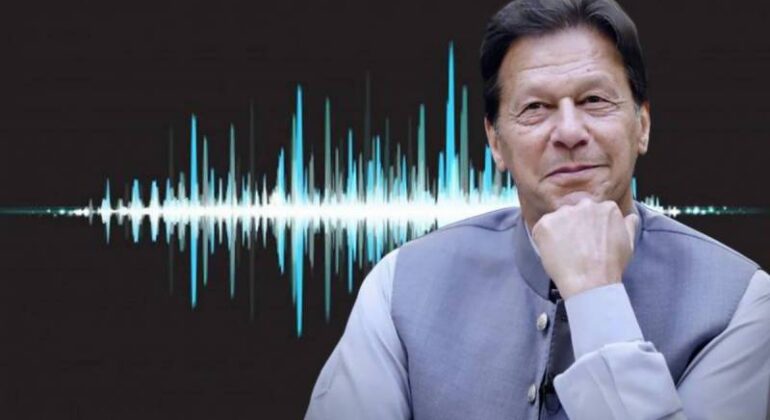 Imran Khan, a former prime minister, was heard discussing a plan to decipher a “foreign scheme” involving a US cypher with former federal ministers Asad Umar and Shah Mahmood Qureshi in another audio tape that was published on Friday.

The deposed PM is heard suggesting to hold a meeting with the former foreign minister Shah Mahmood Qureshi and the foreign secretary in the most recent audio recording of the alleged discussion, which is supposedly between the PTI head and his close aides.

Adding that his previous main secretary had suggested obtaining a xerox copy of the minutes, the indignant politician then instructed his assistants to modify the minutes’ cypher.

During the discussion, a voice claiming to be that of Azam Khan can be heard indicating that the cypher arrived around the eighth or ninth of the month, while Khan claimed that the meeting took place the previous day on the seventh.

Khan then emphasized the need to avoid mentioning the United States, declaring that it is of the utmost significance for their decision to “play with the cypher.”

Asad Umar, a senior PTI politician, contradicted the party chairman by stating that the document was really a transcript of the meeting and not a letter. which the previous prime minister stated the word is for the public.

The ousted PM and his chief secretary at the time talked about how to manipulate the cypher in the first segment of the purported tape.

Khan is heard saying in the audio tape, “Don’t play with this in the name of America. Azam Khan responded by advising him to first have a discussion about the matter.

You may recall that the envoy wrote to issue a demarche at the conclusion of that cypher, Azam said.

He then urged Imran to meet with the foreign secretary and Shah Mahmood Qureshi, who was the country’s former foreign minister.

“Qureshi sb. will read aloud that material, and whatever he says will be copied. I will then record that the foreign secretary prepared this in the minutes. Then, Azam reportedly said, “We will turn it into minutes so that it may enter the office record.”

Then Azam said, “How did they pick it up if we don’t have a copy?” Khan said that there is absolutely a “foreign conspiracy” behind this.