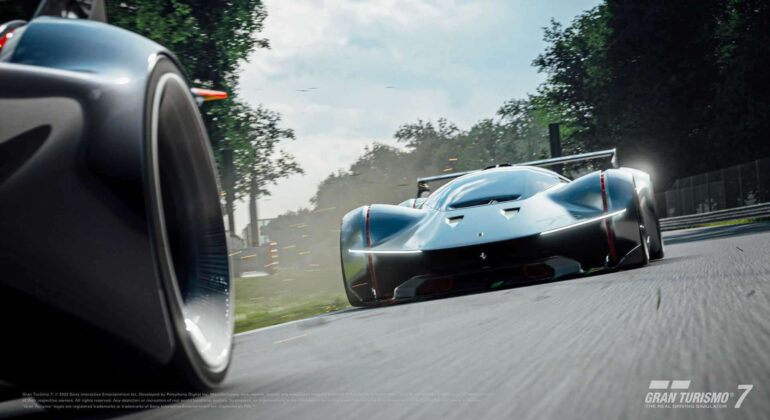 The Ferrari Museum in Maranello will showcase a full-scale model.

With its very own fictitious vehicle, Ferrari has joined the Vision Gran Turismo bandwagon. The 330 P3 and 512 S racing cars from the Prancing Horse, notably, are referenced in the retro-futuristic style. The VGT from Maranello was designed as a single-seater vehicle with a closed cockpit. The “75” graphics signify the 75th anniversary of the brand’s first race car, the 1947 125 S.

The rear end, especially the wing and diffuser, is inspired by the recently released 499P, proving that the design is not just about turning to the past for inspiration in the future. In addition to vented wheel arches,

Ferrari built the VGT with two side channels that direct front airflow over the side pods and around the cockpit, using a unique patented aerodynamic method.

The developers were allowed total leeway to push the 120-degree V6 to unprecedented heights since they were exempt from any limitations. It generates a staggering 900 Newton metres (664 pound-feet) of torque at 5,500 rpm and 1,030 horsepower at a roaring 9,000 rpm.

The ICE is paired with three electric motors, one situated at the back and the other two driving the front wheels. These motors are connected to an eight-speed, dual-clutch gearbox that was taken from Formula 1. A concept vehicle’s hybrid drivetrain adds 326 horsepower (240 kW) to the vehicle’s 1,100 Nm of combined torque in the rear (809 lb-ft). With a dry weight distribution of 43.5 percent front / 56.5 percent rear, the Ferrari VGT is only slightly heavier than a Mazda MX-5 despite having a complex powertrain.

The fictitious race automobile, however, already appears in a game’s audience promotion question. By receiving the virtual keys on December 15, the winner will have early access to the race vehicle.

On that day, a full-scale model will be unveiled to the public at the Maranello museum, where it will be on display with other special Ferrari projects until March 2023.