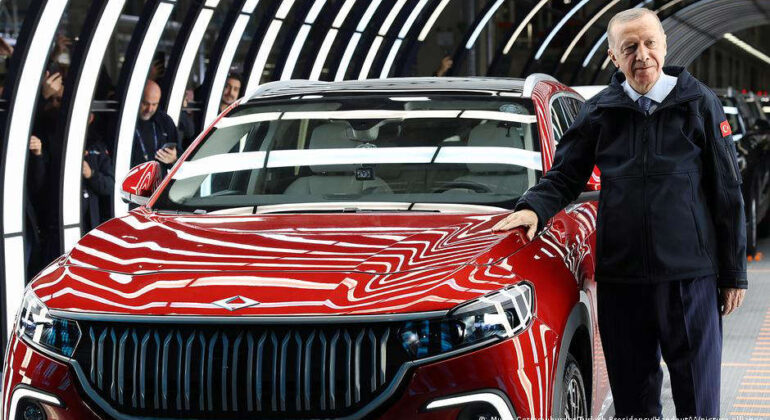 A new electric vehicle called the TOGG has begun manufacturing in Turkey. It’s actually Turkey’s first ever automobile. However, detractors claim that President Erdogan’s desire to win re-election is the fundamental motivation for the entire endeavor.

Will Erogan receive support from the TOGG for reelection?

In order to increase its independence from other nations, Turkey has recently implemented a variety of political and economic reforms. It is now witnessing a significant advancement in the vehicle sector. Turkey’s Automobile Joint Venture Group (TOGG) is starting to produce the nation’s first-ever automobile.

On October 29, the brand-new TOGG auto plant started producing cars. Given that it is the 99th anniversary of the founding of the Turkish Republic, the date has a very clear meaning.

In order to increase Turkey’s independence from international automakers, TOGG was created in 2018. According to writer and automotive specialist Emre zpeynirci, who has closely followed the TOGG project, “it is a significant step contributing to the growth of Turkey’s vehicle sector.”

The facility of TOGG in Istanbul will produce 17,000 to 18,000 electric automobiles in the upcoming year. The facility is intended to accommodate up to 175,000 vehicles yearly, a goal that decision-makers want to achieve in the following five years.

President Recep Tayyip Erdogan, who is up for reelection next summer, is largely regarded as viewing the TOGG automobile as a prestige project. This automobile divides people’s opinions, which is a serious concern, claims zpeynirci.

On June 18, voters will decide whether to elect Erdogan’s successor or to retain him in office.

Even though the TOGG facility has started producing, it will be some time before the first car is offered for sale. According to the corporation, the first vehicles would be available in March 2023, only a few weeks before the election.

Critics of President Erdogan and the AKP believe he is utilizing TOGG to increase his prospects of winning reelection. According to zpeynirci, “Of course, the state always supports investments like this, but if there are political problems, this will undermine the initiative before [a single] car is even manufactured.”

“People’s car” advertising has been used to describe the TOGG vehicle. In fact, according to zpeynirci, when Erdogan originally announced the idea, many “thought this would be a car affordable for everyone in Turkey.”

Not only will many people find this retail pricing disappointing. Additionally, Turkey lacks the infrastructure required for electric cars. According to Automotive Data CEO Hüsamettin Yalçn, “Turkey’s infrastructure is not yet prepared to move to e-cars.” According to him, the average person shouldn’t have to worry about finding enough charging stations between Ankara and Istanbul.

Currently, TOGG automobiles are geared more at domestic than international consumers. According to zpeynirci, this is caused in part by the car’s component mix, which raises production costs. He claims that TOGG’s automobiles will be competitive on the global market if it is successful in employing 70% components created in Turkey.